Ping pong in a public park in Auckland, New Zealand 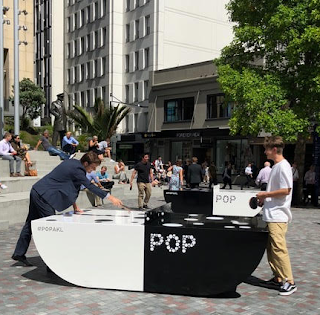 Auckland has small city parks between the major streets.  This one is near a university.  The ping pong tables are weather proof and permanent.  The solid ‘net’ has a place to store balls and paddles.  It’s free to play and no one steals the balls or paddles.   There were 4 tables around this plaza.

Excerpts from an article in Stuff 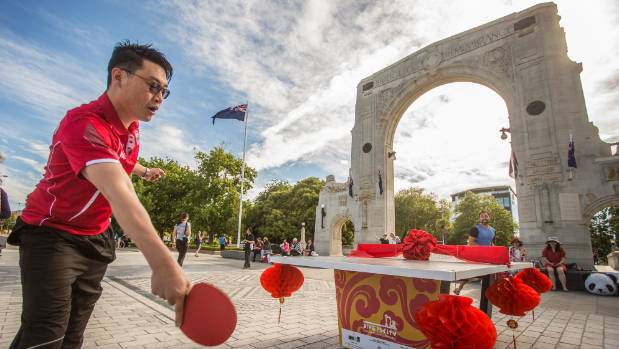 JOHN KIRK-ANDERSON/FAIRFAX NZ
Ethan Lin battles Simon Fenwick, and a strong wind, at the opening of three table tennis tables near the Bridge of Remembrance.

The tables are due to remain throughout summer and are free to use. People can bring their own paddles and balls, or borrow some from Coffee Therapy on Hereford St and Cosmic in Re:START mall.
Any other cultural community groups that wanted to be involved in putting together a public project to showcase their community were welcomed to get in touch with Gap Filler via fillthegap@gapfiller.org.nz

An Open Letter to
the City Commission of Fort Lauderdale, Florida

Is there a possibility that
ping pong tables could be installed for public use?

Metal from POPP.world (there is an office in California)
See below

www.instructables.com › play › sports
Jul 25, 2015 - There are plenty of ways to build an outdoor ping pong table, from concrete to wood to metal, but we chose this method for its costliness, durability and artistic beauty. Concrete tables are what most municipalities would use for their parks and they cost anywhere from 4 to 8 grand.

A "non profit" effort in San Francisco put this article together

We estimate the cost of all the materials to be about $900. Most of the photos you see here are from the table's placement on Market street, near 6th street, as part of the Market Street Prototyping Festival held in early April of 2015.