What do ROADLOVERS do with their photos after the trip is over? How about turning the photos into art?

Roadlovers often take notes.... brochures....  store these souvenirs for a future "some day" when they'll look at the brochures and photos and journals again....

What if those souvenirs could turn into something that we could look at daily?  What if we could create reminers of good times on the road?   Roadlovers could become creators of artwork....

Click here to learn about Boomers who play with travel photos....

Posted by Unknown at 7:49 PM No comments:

A Picture Tour of Mont-Saint Michel: Worth the Adventure, History, Cafes & Wandering

Water surrounds Mont Saint-Michel like a glass platter, changing from misty slate to deep glassy blue; yet the medieval wedding cake spires forever loom like grey mirage. Even seasoned travelers feel the excitement as they catch a glimpse of Mont Saint-Michel.  The mirage became our GPS, a directional beacon a beyond the farms and rivers . This island fortress-abbey-village has successfully paired history and magnificent architecture with bright cafes and shoppes.  Museum-satiated tourists find places for contemplation and conversation filled with imaginings and "did you see"  experiences.
Its history dates from the 6th and 7th centuries eventually evolving from a stronghold of Gallo-Roman culture to a magnificent island abbey boasting towers, ramparts and arches rising from the stone until it now reminds many of the magic of Harry Potter...but far better.

Make sure you arrive right when the gates open. Visitors arrive in a steady line until the streets make passage difficult. 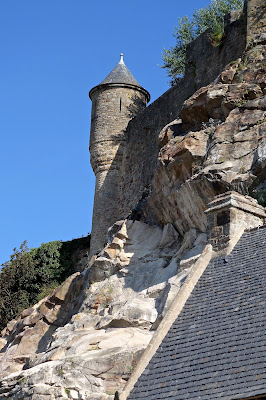 As you approach the entrance it's evident that the structure literally rises out of the stone. 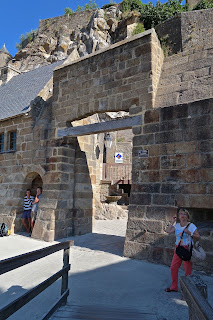 We've crossed the bridge to the single entry point.

The entry gate tells volumes about the need for security in this isolated strategic place. 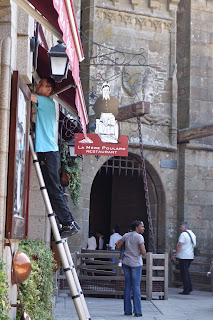 Merchants in the village surrounding the abbey make ready for the hoardes of visitors.  The village circles the abbey with shops, cafes and charming stone homes that were formerly where the workers needed to maintain life there lived. 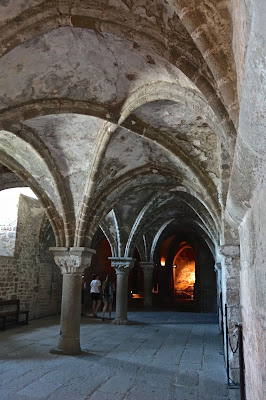 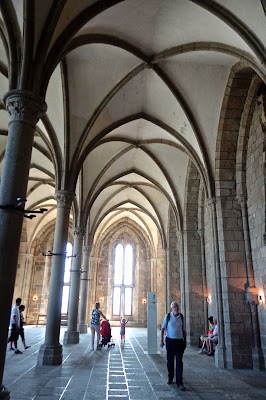 Once inside this gigantic structure, vaulted ceilings and hidden corners carry eyes and imagination in all directions 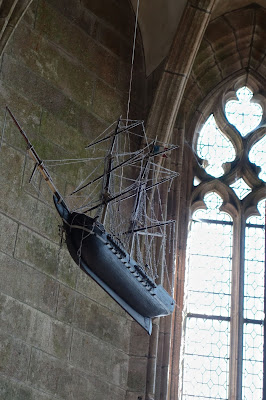 An ancient ship model hangs from the rafters, reminding the monks to pray for sailors. 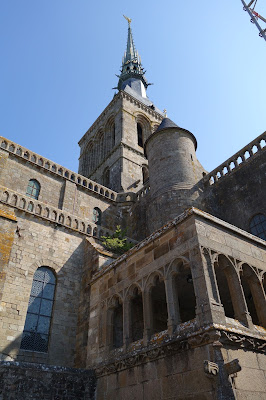 Few realize that early mathematicians knew this immense structure needed many underground crypts and chapels dug in order to support the increasing tremendous weight of additional structures added over time.

Not all is dark and overwhelming.  There are areas to stroll and enjoy the light. 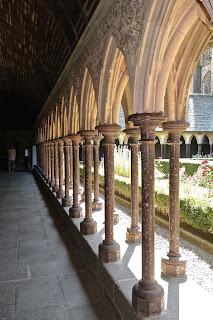 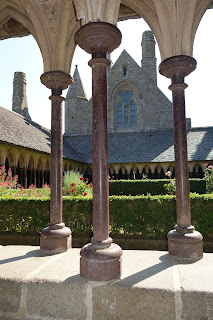 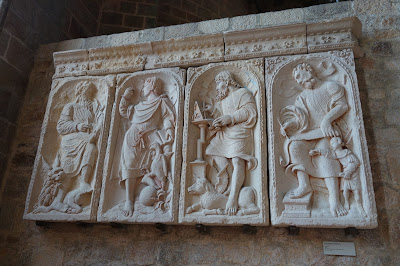 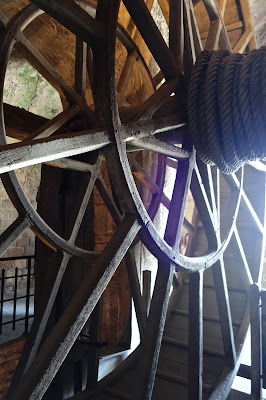 Huge gears and a complicated system to ring the heavy bells.  Imagine the magnificent sound hear from afar. 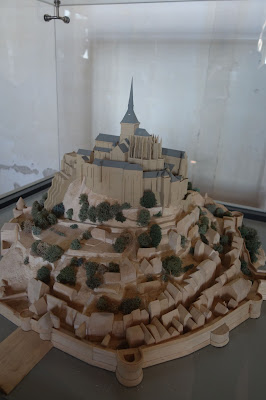 One of the final rooms before exiting the abbey contains models of Saint-Michel as it progressed over time.  This early model shows that today's building has evolved to about four times it's original size.


Leaving the never-ending interiors for a stroll around the exterior areas continued the feeling of time travel with beautifully maintained stone pathways and dwellings.. 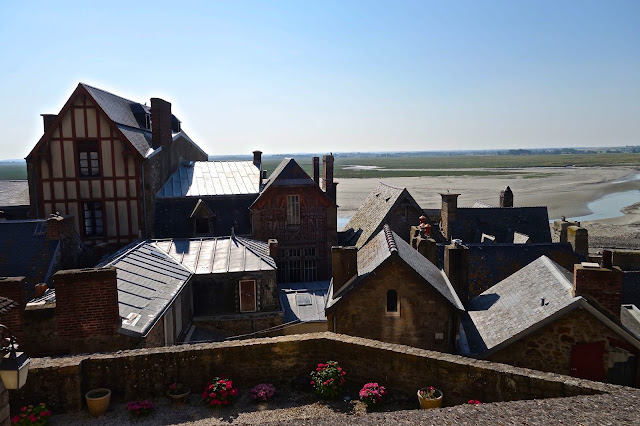 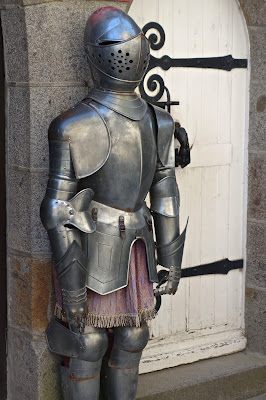 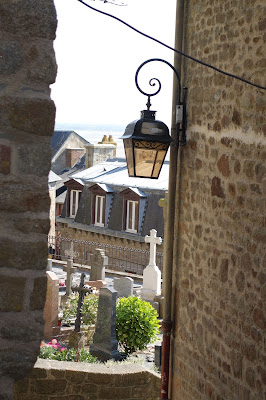 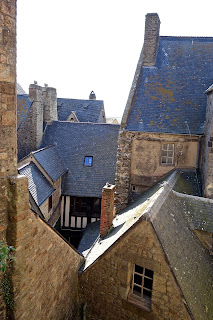 This could be a set from Harry Potter or some other fantasy kingdom.
We expected the memorable history; however, the delightful shops and numerous cafes proved a relaxing surprise finale after some intense exploring.  Hurray!  Shopping, eye candy and wonderful French cuisine. 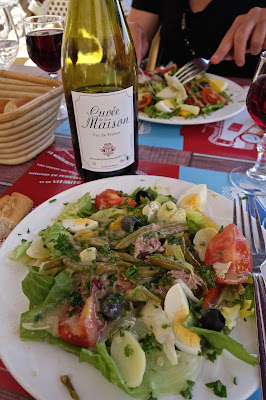 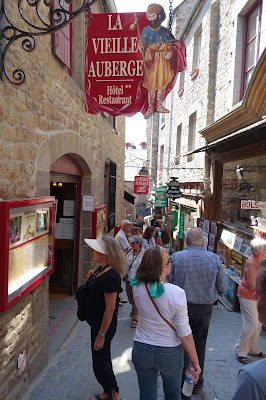 La Vielle Auberge looked like a good place.  We loved the magnificent Salade Noicoise, Anchovie Maison, Moules Creme and plentiful wines, followed by Cafe Creme.  The hardy menu for three came to about 83 Euros.  No charge for the great atmosphere. 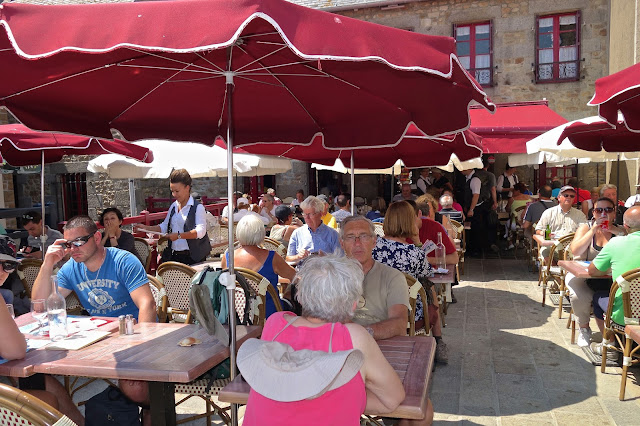 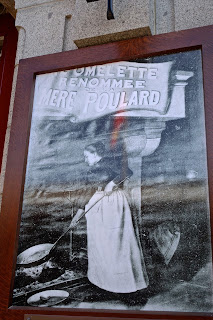 Omelette Renommee Mere Poulard is one of the most famous restaurants in the area.  It can take weeks to get a reservation.  Their famous omelettes go for as much as $50.00 and up. Unfortunately, we would have to plan better the next time in order to get in.


Not to be discouraged -- there are plenty of charming places to enjoy food and friends and shopping. 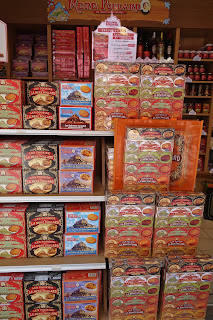 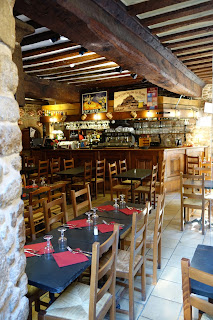 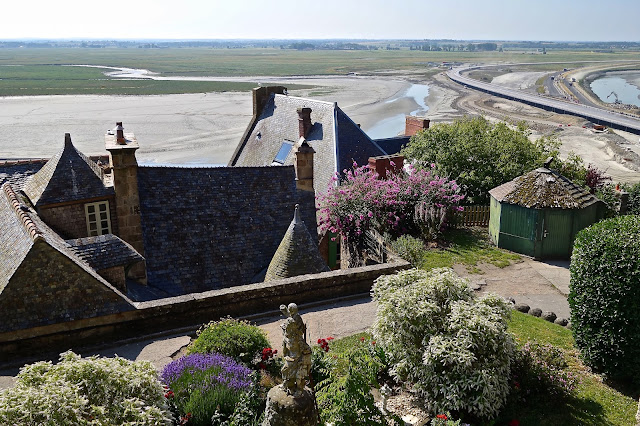 Once surrounded by water during high tide, the changes of ocean and time finally filled the area around so that the abbey no longer was an island but rather a point on a sandbar.  A recently completed restoration taking years and countless tons of dredging has returned it to the striking vision on water it once was.  Here's a view of what would have been ocean before the dredging was completed. 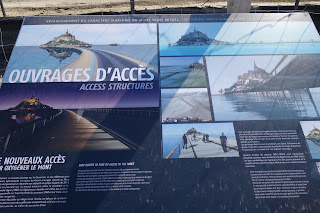 Signs at the time we visited that explained the huge undertaking. 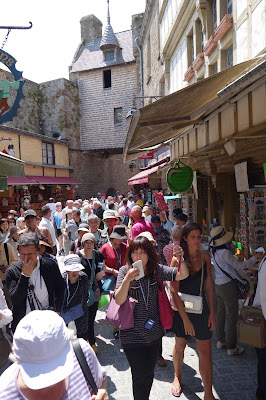 It's only about 2:00 pm and the streets are packed with streams of visitors.


Looking back as we say our goodbyes we can imagine the difficulty of reaching the abbey centuries ago before there was a bridged road bringing people across. 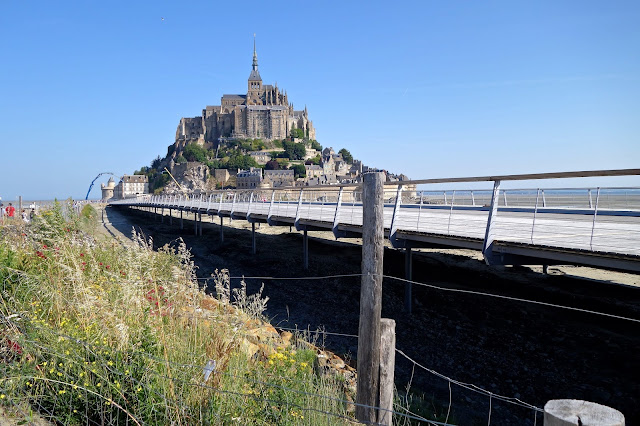 The End of a Wonderful Day